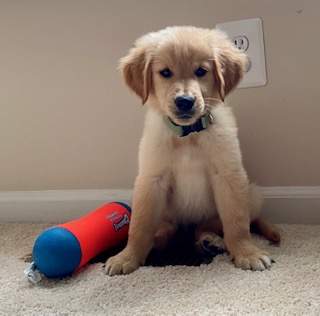 Meet Wilson – The Chronicles of a New Pup

Today marks 3 weeks since I got my new Golden Retriever puppy. I’ll back track to explain how I got here. In the beginning of June, I had to say goodbye to my sweet Darby who would have been 14 in August. My husband and I had always said that when she was gone we were going back to a two-dog household, three really was just a lot of work. But then… I got the itch. Likely any of you reading this know what I mean. It was just too quiet (with working, two kids and two dogs in a pandemic). My husband was initially adamantly opposed (I think he might be the smart one). But with some time, and persistence, he came around. So, like so many people have done in the last 6 months, we decided to get a puppy.

Enter Wilson. For whatever reason, this time around, we had a very hard time coming up with a name. This time my daughters were old enough to have some semblance of a vote, so maybe that is why, but I’m pretty sure that is why he did not end up being named McLovin.

Anyway, at 9 weeks old, he came home. My daughters were immediately in love, my husband and I were cautiously optimistic and my other two dogs were less than thrilled. The first couple days were rough. Emerson, my 5-year retriever mix, thought Wilson should be used for bite practice and Zero, my 6-year-old retriever mix, quickly showed Wilson who was going to be boss. It stayed like this for about a week and it was definitely stressful. Literally, like a switch had been flipped, one week into his stay, Emerson decided he was acceptable and she started to play with him. I’m not sure if she felt bad for him because we were forcing him to learn how to swim in a pool (the two elders, despite being retriever mixes are petrified of water).

Since then, overall, things have been smooth sailing, all things considered. He sleeps through the night well and has very few accidents in the house (of course the family is always home so he gets walked often). He does like to eat EVERYTHING and I told him he is my foreign body surgery waiting to happen. Smooth sailing until two nights ago when he got “it” stuck out. And I mean all of “it.” He was completely panicked and crying, the other two were trying to figure out what was going on and my husband and I were trying to help without getting bitten. Thankfully I was home because, otherwise, this was not something easily corrected without a trip to the ER. He keeps us busy and, just like a toddler, we rest (or write a blog) when he sleeps.

Stay tuned for ongoing updates on Wilson, his milestones and health progress as well as some tips and tricks on how to care for new puppies to help them turn into healthy, happy adult dogs.

Below from left to right: Zero, Emerson, Darby

Below from left to right: Wilson, Wilson, Zero, Emerson 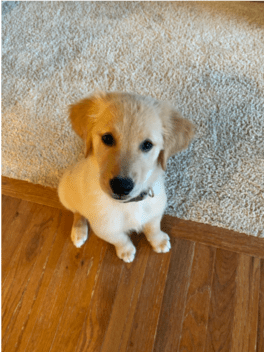 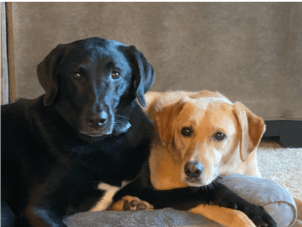 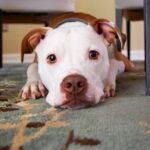 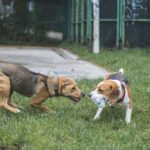 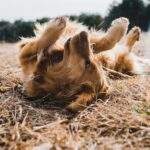