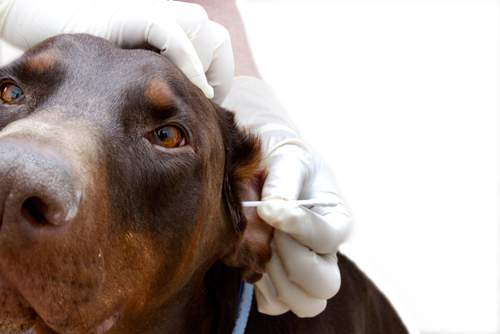 Is Your Dog Losing Its Hearing?

Deafness in dogs can be temporary, partial, or a complete loss of hearing in either one or both of the ears. There are several causes of deafness, including heredity, toxic or viral damage, birth defects, trauma, infection, a blocked ear canal as well as due to old age. Congenital deafness is most commonly associated with merle and white coat colors. Most common dog breeds affected include the Bull Terrier, Dalmation, Australkian Heeler, English Cocker Spaniel, Catahoula, Parson Russell Terrier and Boston Terrier. Congenital deafness is usually permanent, and does not respond to treatment.

Other permanent causes of deafness includes trauma to the temporal bone which surrounds the inner ear, as well as severely intense loud sounds such as a gunfire. Loss of the fatty tissue lining nerve cells called myelin, anesthetic events, cancer of tumors that involve the ear or brain, and toxin drugs (antibiotics, aspirin) can all lead to permanent loss of hearing. Acquired deafness can be a result of inflammation (severe and chronic) known as otitis externa or excessive ear wax. If a pets’ ear drum ruptures, this will also lead to deafness.  Many times hearing can return after the above conditions are resolved.

Often times it may be difficult to detect hearing loss in pets, especially in cases involving partial or hearing loss in one ear. Diagnosis often involves owners observation of the pet’s response to stimuli. It is important to distinguish the pet’s response to touch, sight, and smell from the response to sound. The most obvious sign of deafness is inability to respond to sounds. For example, failure to respond to sound in a sleeping pet, is indicative to deafness. Other signs of deafness may include an unresponsiveness to the surroundings, refusal to respond when being called by owner, excessive barking, hyperactivity, and lack of ear movement.

Deafness in one ear is challenging to diagnose or detect by owner. It generally requires an electronic diagnostic test by a veterinarian. Examination of the external ear with an otoscope, computed tomography scan, MRI, radiographs and a neurological exam by detect the cause of deafness, especially in cases of acquired deafness.

If an ear infection is suspected, cultures may be performed, or ear swabs can be done to performed to isolate the infectious agent and prescribe appropriate antibiotics. A Brain stem Auditory Evoked Response (BAER) test can be performed to measure how well the CNS is responding to auditory stimuli. At times, surgery may be an option to correct underlying factors if it involves the middle or out ear.

Fortunately, deafness in a pet does not involve pain or discomfort due to the condition. It generally requires diligence and dedication when owning a deaf pet as these pets are easily startled, which can lead to unpredictable behavior. In addition, deaf pets require vigilant owners as these pets are not able to protect themselves from certain dangers such as approaching vehicles. Have a leash on your pet at all times when outdoors, it is also important to microchip your pet and  have ID tags that identify that the pet is deaf as well as having owner contact information on tags is important.

If you believe your pet could be suffering from a loss of hearing, schedule an appointment with your veterinarian.